While countries in other regions around the world share some similarities in their economic conditions and workforce environments, the same cannot be said for APAC. GDP varies greatly from country to country, as does population growth, skilled-worker availability, political and regulatory conditions, market strength, and sophistication of talent strategies. In addition, conditions change rapidly in many parts of the region, and the available data is often unreliable or difficult to interpret.

With these variations across the region, it is impractical to identify a single set of macroeconomic, business, or talent-related trends. Instead, a useful perspective can be gained by looking at APAC on a country-by-country basis, focusing on the economies of China, Japan, Australia, and India as a representative mix in the region.

China now produces approximately 15 percent of global GDP, yet its GDP per capita is a mere fraction of other industrialized nations, only ahead of agriculturally heavy India. In 2013, China’s government made the decision to begin the country’s transformation from a manufacturing focus to a more lucrative services-based economy. Imports declined sharply, as did GDP growth, the latter a victim of its own success, due to a high bar set by expansive growth in the prior decade.

From a workforce standpoint, China’s “one child policy,” overturned in 2013, has left its population unbalanced. As its economy transforms, Chinese business and government planners find that global companies were more than willing to export manufacturing jobs to China, but higher-end services jobs seem to have found their home in India. 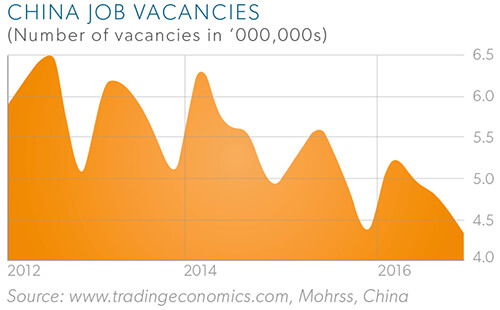 China’s situation is unique due to its political approach to controlling the labor market and production. As labor is utilized, it can then be repurposed, but that takes time. A historically manufacturing-driven workforce is understandably falling short of skilled worker demands in the new Chinese economy. In other areas of the world, talent planners might be inclined to lean on outsourcing or use of contingent workers and staffing partners to fill the gap, so it may be surprising that contingent staffing is not a larger market in China than what it actually is. Despite possessing the largest employed ranks in the world (greater than the next 10 significant labor markets combined), China represents only two percent of global contingent spend. And not surprisingly, just like all major economic markets, China itself has a severe shortage of skilled trades.

Japan is the third largest contributor to global GDP. Since 2013, Japan has added nearly two million jobs; however, one-quarter of those gains have come from wholesale and retail trade. 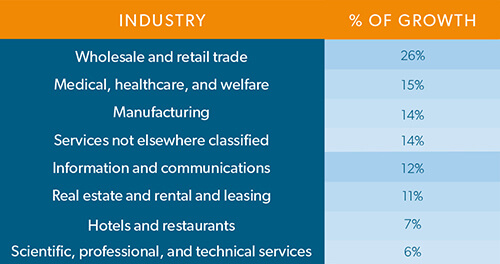 Of all the segments that account for more than five percent of Japan’s economic growth outside healthcare, which employs a very narrow occupational range, little is coming from higher-skilled industries. More than anywhere else in the world, Japan’s ability to grow higher-end jobs is extremely limited. Its overall unemployment rate is a minuscule 2.8 percent, down 0.4 percentage points from the previous year, and job vacancies are soaring. 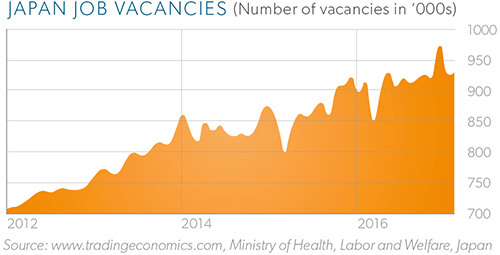 Considering Japan’s tight labor supply, one might expect wage inflation to skyrocket; however, the massive growth in lower-skilled jobs has limited overall wage growth rates. There is also the fact that there are very few workers to go around in Japan. The scarcity is due to Japan’s strong anti-immigration policies, aging population (Japan’s labor force will shrink by 500,000 annually for the next few decades), and very poor birth rate of 1.43. As a result, many workers are needed in the lower-skilled industries just to keep communities functioning.

Considering the conditions, one would expect talent planners to rely on flexible workers to fill the gaps in Japan’s tight labor market. Notably, however, Japan is not a hot spot for the “gig” worker population. Less than nine percent of workers in Japan are self-employed. There is not enough flexibility in the economy or culture for workers to detach into more personal-based businesses. Japan does, however, have a sophisticated and progressive labor market, and it is the second largest consumer of contingent staffing at 14 percent. The penetration rate of 4.2 percent for temporary staffing outpaces contingent spend in the U.S. by a significant amount.

Despite contributing only two percent to overall world GDP, Australia’s oil export-heavy economy produces a high GDP per capita. There are only 12 million employed workers in the Australian economy. For context, that number is equal to the population in the state of Texas in the U.S. and slightly ahead of the Netherlands, so while Australia’s current unemployment rate is just under six percent, the actual number of people unemployed is small. This small workforce is offset by Australia’s history of promoting immigration, which provides a constant stream of new workers into its economy. 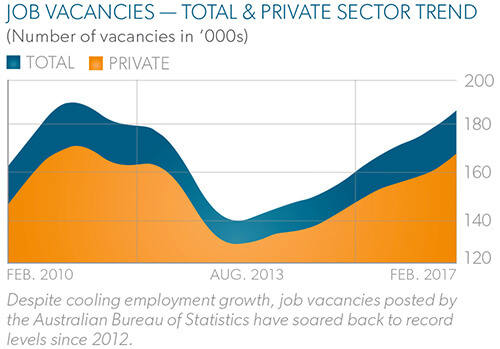 Where are the talent shortages in Australia’s small but highly productive economy? One way to answer that question is to look at a list of the most in-demand jobs posted on “Focus Australia,” a publication of the Australian government used to promote immigration. Unsurprisingly, the list reflects the same worker shortages experienced by the rest of the world, but those shortages are not limited to scarce technical skills. Nearly every professional job can be found on the list, from IT (data analysts and developers), marketing, and HR to accounting and even manufacturing production managers. Likewise, the list also contains many lower-skilled job types such as food preparation and hospitality roles.

In sharp contrast to the other countries in the region, Australia’s views on labor movement and acquisition are very conducive to building a strong workforce. While it represents only three percent of global contingent staffing spend, it has the third largest amount of revenue passing through managed services provider (MSP) programs and is a major player in the recruitment process outsourcing (RPO) space.

Although more sophisticated labor economies like Singapore and Hong Kong are important to many global companies, they are dwarfed by India, the world’s seventh largest contributor to global GDP. Agriculturally heavy and exceedingly imbalanced, India has a seemingly endless supply of labor, yet it has difficulties filling technical jobs despite being the world’s home of offshoring.

The availability of reliable data for India is sparse. The last official unemployment rate, released in December 2013, was 4.9 percent; however, of the 500 million people in its labor force, 94 percent work in an unincorporated capacity and are not included in the unemployment calculations. For the 30 million who are incorporated, 60 percent work for the government.

It is probably surprising for many to note that only two percent of India’s 500 million workforce has received any formal skills training, but informal training is slightly more common. Government data further shows that only 6.8 percent of the estimated one million people entering India’s labor pool every month at the age of 15 are “skilled,” according to a 2014 Labour Bureau Report. Considering all the variables, a reasonable estimate of available skilled workers is approximately 30 million in India, but the need is 120 million. The country’s skilled labor shortage is well known. Many startups struggle to find or retain skilled workers, and wage inflation is rampant in that section of the workforce.

To make up for the supply shortage, established and rapidly growing offshoring services giants often use their own training classes to develop needed skills among workers in India. They generate what would be considered very attractive jobs if located in other parts of the world; however, in India, the difference in pay between jobs is not as significant, making it very attractive to non-Indian firms looking to offshore or outsource work. For example, in the U.S., experienced .NET developers make approximately $55 per hour. In Bengaluru, India, they may make $8 per hour. Meanwhile, a much lower-level technical help desk representative makes about $15 per hour in the U.S. and around $2-3 per hour in Bengaluru. That $40 per hour difference between occupations in the U.S. is a mere $6 per hour difference in India. With India’s comparatively tiny differences in wage ranges, offshoring demand from the U.S. and other English-speaking countries like Canada or the U.K. remains high.

To address skills shortages, companies in India are turning to talent solutions such as MSP to manage contingent workforce suppliers. India is the sixth largest country in terms of revenue through MSP systems. Given the low pay and bill rates in the country, that is not a surprise, and it suggests that the actual headcount in the systems is likely significantly larger than the countries that rank above it. As wage inflation continues to grow in the skilled sector, India may end up being the largest area of revenue growth for the MSP market in the next 10 years. When it comes to recruiting traditional full-time employees, companies in India do utilize RPO solutions providers, and India’s RPO market is continuing to grow. Discerning India’s share of the RPO market is difficult as SIA’s recent RPO report lumps it into the “Asia” sector, which has approximately four percent of total RPO placements around the world.

India’s demographic profile suggests it will continue to become an integral part of the global labor force. An astounding 70 percent of Indians will be of working age in 2025, a stark contrast to the steadily declining rates of working populations in Japan, China, Europe, and even the U.S. However, to rise to the demand for needed skills, the country must overcome the crippling internal roadblocks of underfunded and antiquated educational and infrastructure facilities.

Like no other part of the world, population demographics are the story in APAC. Japan represents the dangers that extreme labor tightness can put on GDP while India represents the opposite: a potential labor supply to help other nations struggling to find enough skilled workers.

Elements of the staffing industry could explode in these markets, MSP and RPO being the most immediately obvious, something SIA also predicts due to global firms’ enrollment of all hiring into their programs. SoW usage is less clear. India is a country that can attribute its growth to SoW as an alternative labor solution. Australia uses independent workers much like the U.S. or Europe. Historically, Japan relied on China for offshoring or SoW work, but that was before China began its services transformation and the skills shortages that came with it.

In the end, employers in much of the area, also including Singapore and Hong Kong, will increasingly need to reach beyond their borders. There are vast numbers of minimally skilled workers in neighboring countries who could potentially be trained using models similar to India’s with the right investment and loosening of restrictive governmental policies. As demand for skilled workers continues to grow, improved training and access to workers across boundaries will become more than just a smart policy idea for APAC businesses and governments; it will be an economic necessity in the region.