The U.K. has distinct challenges and opportunities in relation to other countries across Europe. The country’s large global banking industry recovered from 2009’s lows. Brexit, a formal withdrawal from the European Union that has been passed but not yet implemented, has yet to have a large impact. Offshoring is well-established as a workforce option, and companies are competing strongly for dwindling talent supplies at home.

As a result of the historically strong competition for workers, companies have developed mature talent operations, including widespread utilization of flexible workers and adoption of sophisticated staffing, Recruitment Process Outsourcing (RPO), and Managed Services Provider (MSP) solutions. Understanding the economic factors and workforce dynamics, companies will continue to evolve their talent practices, but they will be doing so against competitors who are also mature in their approaches to securing critical skills.

From an economic perspective, the U.K. has several unique features. Its manufacturing sector represents around 10 percent of all jobs, close to the same percentage as the U.S., and its professional and technical services industry is larger as a percentage of the total than the U.S. However, its GDP per capita is one of the weakest compared to the other larger European economies. The low per capita GDP is surprising considering that London is both a world leader in banking and finance and a heavy employer of IT workers.

The high banking presence put the U.K. in a vulnerable position during the 2009 economic crisis, similar to the U.S., but the U.K. economy as a whole bounced back strongly without a significant contribution from banking, also similar to the U.S. The unemployment rate is now below its pre-recession levels, and job vacancies are now back to record highs.

The passage of Brexit is a potential disruptor, although the fallout remains unclear. The actual separation date is not until the end of March 2019, and while Brexit is widely viewed as an isolationist policy, the reality may be far less dramatic when it comes to labor market dynamics. Trade agreements will be slowly worked through and renegotiated, not withdrawn. Companies will reposition workforces that had previously been in EU headquarter locations in the U.K., but even those moves may be small.

Essentially, Brexit is a distraction from the greater reality that the U.K. itself is also facing severe shortages of skilled workers. In 2015, the Institute of Chartered Accountants of Scotland estimated that a massive £10B ($13B) was being lopped off U.K. total GDP due to unfilled skilled job openings, much more damaging than Brexit or even the sharp decline in exports to China from Britain’s heavy equipment and steel manufacturers. The U.K. publishes a list of the skill sets so in demand that they can be offered to non-U.K. residents without posting the openings domestically first. The list, published on workpermit.com, is littered with engineering and IT job titles in addition to healthcare roles. While Brexit’s intent was focused largely on reducing the swells of lower-skilled workers from outside the country, it has not stopped employers from expressing concern about limited access to skilled talent after its implementation.

With unemployment below pre-recessionary levels and job vacancies at record highs, it would appear that the only dynamics holding the U.K. back from accelerating growth is the lack of talent. Whether Brexit will make acquiring skilled foreign workers more difficult is not a question for the near term, but it may be the single most important factor for companies planning longer-term hiring initiatives. 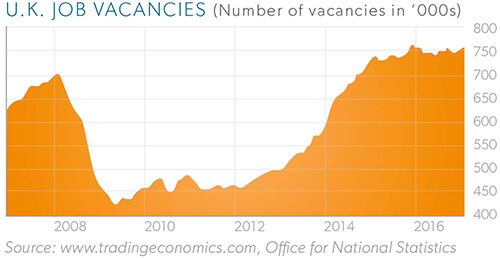 The U.K. is a mature market when it comes to diverse talent acquisition methods and ease of doing business, making it conducive to the use of contingent workers or Indian offshoring. India invests more in the U.K. than the rest of the EU combined, thanks largely to a shared use of the English language. Brexit could cause more offshoring from U.K. companies, since Eastern European job applicants may find it much more difficult to get work visas into the U.K., but it’s important to note that the country already has a strong, historical blueprint for offshoring.

When it comes to the use of a flexible workforce, U.K. companies rank high among their peers around the world. Despite total employment of only 70 percent of Germany’s level and just 10 percent more than France, the U.K. spends the third largest amount on contingent staffing services, ranking only behind the U.S. and Japan. According to Staffing Industry Analysts (SIA), the U.K. also has the highest percentage of European IT temporary staffing spend, with 17 of the 30 largest IT staffing companies in Europe headquartered there.

Considering the heavy usage of staffing partners, it is not surprising that U.K. companies are also strong users of MSPs to help optimize the management of those contingent workforce suppliers. Although significantly behind the U.S. in total spend through MSPs, the U.K. stands alone in second place with nearly six times more spend than third place Australia. Furthermore, a large portion of MSP usage by
U.K. companies focuses on IT workers and other professional roles, whereas staffing by European counterparts in Germany and France focuses almost exclusively on light industrial needs. The heavier and more strategic usage of MSP in the U.K. indicates that it is distinct from the rest of Europe in the maturity of its markets and the state of its regulatory environment — both factors making the U.K. conducive to advanced talent strategies and partnerships.

When it comes to hiring traditional full-time employees, U.K. companies are also relatively mature in their usage of solutions partners to optimize recruiting. The U.K. is the dominant market for RPO in Europe. As mentioned earlier, the use of contingent RPO, a solution that includes an element of staffing in addition to recruitment, may provide a path for further development and increase revenues. While RPO usage is likely to increase in Europe at a greater pace than the U.S., it is unclear how much of that growth will occur in the U.K. considering that it has a more mature market than its European counterparts.

Looking Ahead: A Race for Best Practice Talent Capability in a Competitive Market

In many ways, the concerns of talent planners in the U.K. are similar to those of the most forward-focused companies in the U.S. As with all regions, the core workforce issues stem from a scarcity of critical skills in the available talent supply. In competing for those skills, organizations are stepping up their approaches to engaging flexible talent, building their employer brands to better attract talent, applying advanced data and analytics for improved workforce intelligence, and advancing their use of recruiting technologies and sourcing practices. For any company doing business or securing talent in the U.K., the market will often put a premium on these talent best practices. The challenge for any company will be to look beyond the transactional aspects of staffing or recruiting to put these practices into place.