For companies in Europe, securing talent involves navigating a range of economic, regulatory, and social factors. Conditions vary greatly from country to country; however, analysts tend to view the primary Eurozone countries of Germany, France, Netherlands, and Italy as sharing a similar level of development in terms of talent practices. The U.K. has distinct market characteristics and is best viewed separately.

With that in mind, a look at the Eurozone countries reveals a range of dynamics that place pressure on the workforce and employers in ways that are magnified compared to other regions. Both services- and manufacturing-focused economies are struggling with diminishing supplies of skilled workers, and companies are also working with challenges related to population, politics, and regulations.

Population changes and economic conditions are having a profound influence on the workforce in Europe. Despite being many years into a general recovery, countries like France and Italy are still experiencing unemployment rates of 10 percent or greater although the underlying causes are more political than economic. Meanwhile, Germany’s unemployment rate of around four percent represents one of the healthiest in the world. The Netherlands enjoys similar economic strength. The relative strengths and weaknesses of these economies are particularly noticeable and reinforced in job vacancies data.

While Germany and the Netherlands hover at historic highs, France reflects the struggle of countries left behind in the current growth cycle. What is particularly interesting in the details is the contrast to the U.S. Both France and the U.S. have largely services-based economies, with 76 percent of France’s GDP and 71 percent of the U.S. GDP coming from their services sectors. France, however, does not have a strong GDP per capita. Its predicted GDP growth is weaker, and its inflation is lower. 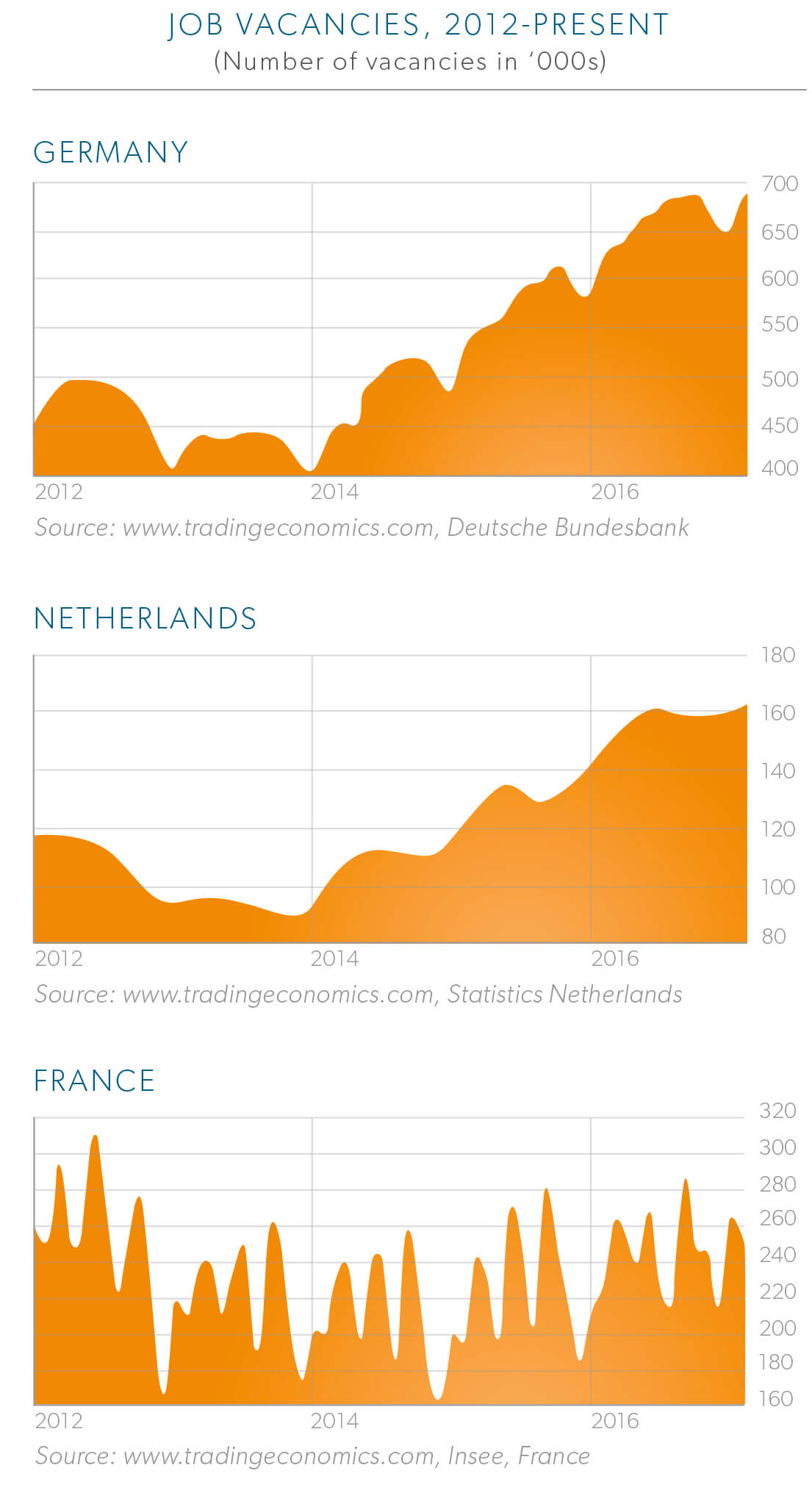 Germany, a more manufacturing-focused economy, currently enjoys higher GDP measures than France. Even more interesting is that Germany’s manufacturing sector (up 269,000 YoY) led all its industries in net hiring while manufacturing in France (down 23,000 YoY) was second to last in jobs lost. In France, the only sector hiring at any significant level is administration (government) while that is the only industry contracting in Germany.

Industry performance in Germany and France differ, yet both share a similar population trend characteristic of countries in the region. Namely, labor force participation rates have not grown in the past 10 years after growing for decades. This lack of growth is largely due to one reason. Most European countries experienced their baby boom at the same time as the U.S., from 1946-1960s, with Germany’s baby boom starting roughly nine years later. That timing means that the region is currently experiencing a high level of retirements that will continue for the next several years.

These retiring people need a generation to replace them, and this is where the problem lies. In Europe, the Millennial generation (those born after 1980) represents only 24 percent of the adult population compared to 27 percent in the U.S. According to Pew Research, in Italy, it is as low as 19 percent. While Millennials are overtaking Baby Boomers as the largest generation in the U.S., in Europe, people over 50 still lead the population. At the same time, birth rates continue to decline, falling to 1.55 in 2013 (ranging from2.01 in France to just 1.38 in Germany). For context, a rate of two is required for population stability, and the U.S. is at 1.87, down from 2.12 in 2007.

These population shifts will have some implications on the workforce, particularly as it relates to experience and education levels. For example, Eurozone countries have significantly fewer college-degreed workers as a percentage of the population than elsewhere in the world. Population pressures are likely to remain a continuing issue for European businesses, and even the strong German economy must address the resulting talent scarcity challenges that those population changes bring.

Regardless of unemployment levels, European countries are experiencing a shortage of STEM workers and an overabundance of industrial or low-level office workers. According to the Institute of Electrical and Electronics Engineers (IEEE), “The European Commission (EC) says the demand for new information and communications technology (ICT) sector jobs is up to 120,000 a year in Europe, which EC Digital Single Market Chief Andrus Ansip says could lead to a shortage of more than 800,000 skilled ICT workers throughout the continent by 2020.

IEEE notes that Germany has the most job openings in the engineering and IT fields although one cause of unfilled jobs is a requirement that all workers in the country understand the German language. In France, the skills mismatch is not as prevalent, but regulations have made it very difficult for the labor market to have the flexibility to fill job openings.

Responding to the continuing talent scarcity, European companies differ from those in the U.S. and U.K. in their emphasis on flexible workers, staffing, and talent solutions. Together, the Eurozone represents roughly 16 percent of total contingent spend around the world according to Staffing Industry Analysts (SIA), lower than the U.S. Collectively, they have one-tenth the level of revenue passing through managed services provider (MSP) systems as the U.S. does and only one-third of that in the U.K. At the same time, however, contingent workforce solutions in the region do include an option beyond MSP. This alternative approach is “Contingent Recruitment Process Outsourcing (RPO).” In this arrangement, the RPO hires the vast majority of placements but does farm out a small percentage to contingent staffing firms that the RPO manages. Overall, the rate of RPO growth is expected to be higher in Europe than in North America, according to SIA, and contingent RPO may contribute to that growth.

Looking Ahead: A Challenging Future for Talent Planners in Europe

While many observers consider the European Union as a driver of regional economies, the reality is that internal political dynamics are a key force in the labor economy of the countries in the region. These internal factors are not to be downplayed and have become an integral part of the story of the most recent economic recovery. Immigration, regulation, and political uncertainty will continue to influence economic conditions; however, job growth in skilled industries drives economies forward, and many European countries are in a poor position to address those needs.

For companies navigating the markets for workers in Europe, a focus on flexibility will be important, just as in other regions. A growing portion of organizations are improving their approach to building data-driven intelligence, strengthening their employer brands, and navigating the complexities of multiple regulatory environments. Moving forward, business planners will require an open-minded approach to talent and workforce strategy and will likely expect expert guidance from their staffing, MSP, or RPO partners in the process.